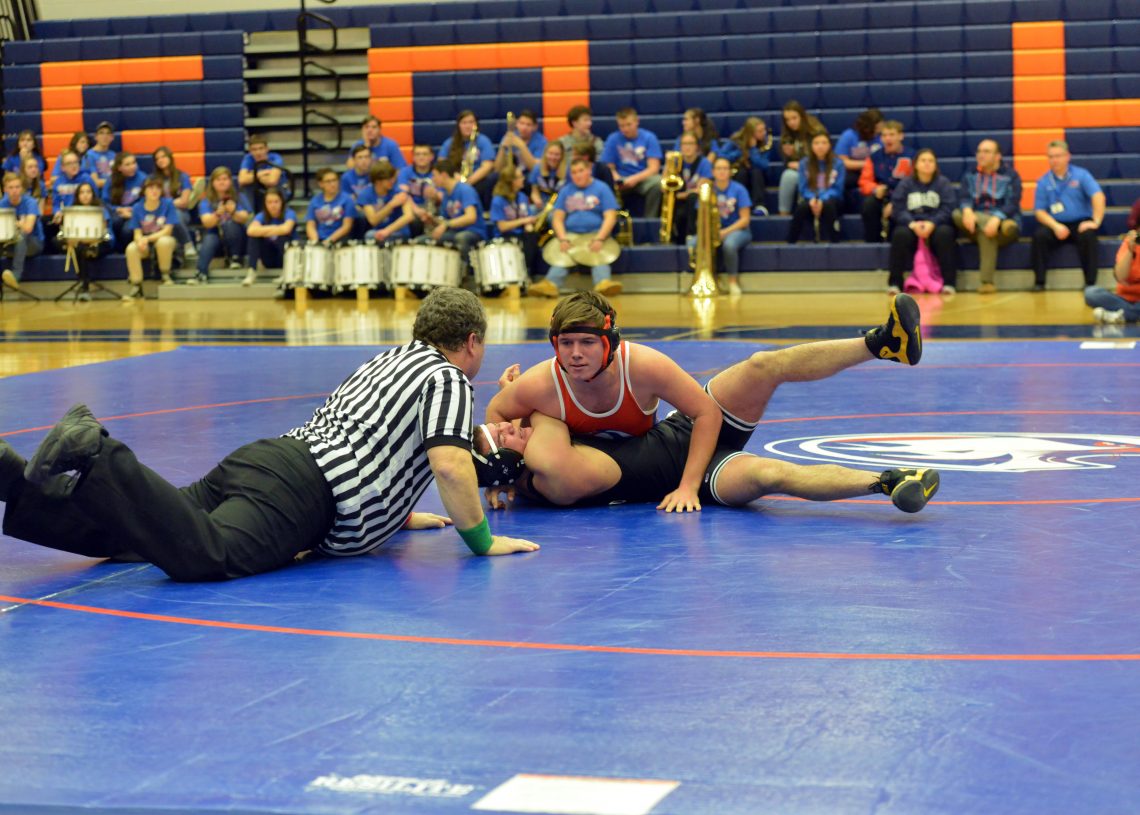 Armstrong junior Josh Shaner finishes off a pin of Pine-Richland's Zachery Kost at 3:06 in the second period of the 170-pound match during the River Hawks' 46-34 win over the Rams on January 9, 2019 at Armstrong Junior-Senior High School in Kittanning.

The Armstrong River Hawks’ varsity wrestling team got back to its winning ways on the night the program honored its seven seniors with a 46-34 win over Pine-Richland on Wednesday night.

The River Hawks got four pins on the night to pull away from the Rams late in a meet that evened the team’s season record at 2-2.
“There was a little bit of strategy for us, moving our lineup around a little bit, to get us to where I thought we could pull away a little bit and our guys did the job,” Armstrong head coach Brandon Newell said after the match. “That was what it came down to.”
The match began 12-0 in Armstrong’s favor before any actual wrestling took place as Michael Kinzey won by forfeit at 106 pounds and senior Mayce Wonderling scored a victory by forfeit at 113 pounds.
Pine-Richland got on the board when Kellen Laffey scored a pin over Brayden Trumbull in the 120-pound match at 4:18 in the third period. The Rams’ victory cut the team score to within six, 12-6.
In the 126-pound match, Pine-Richland’s Robert Palmieri scored a major decision of Armstrong’s Brandon Reyes, 10-2.
The River Hawks’ Payden Tyrell answered Laffey’s major decision with one of his own in the 132-pound match as he outscored the Rams’ Zachary Esswein, 12-4. Tyrell’s victory put Armstrong up 16-10 on the team scoreboard.
Pine-Richland was able to tie the team score, 16-16, after Nathan Lukez pinned Armstrong’s Noah Cooper at 3:02 in the second period of the 138-pound match.
The River Hawks and Rams continued to alternate pins and in the 145-pound match, Armstrong’s Hunter Turner was able to drop Pine-Richland’s Jay Fowler at 3:30 in the second period.
Turner’s pin gave the River Hawks a 22-16 lead, but the theme of alternating pins continued in the 152-pound match when the Rams’ Luke Leverdusky dropped Armstrong’s Lucas Galinski at 1:09 in the first period to tie the score, 22-22.
Pine-Richland took a 28-22 lead on Armstrong when the Rams’ Cole Spencer pinned the River Hawks’ Isaac Robb at 0:59 of the first period.
That’s when the fireworks began for Armstrong and Newill’s strategy of lineup rotation began to play a major factor in the outcome of the match.
At 170 pounds, Armstrong junior Josh Shaner secured a pin over Pine-Richland’s Zachery Kost at 3:06 in the second period. Shaner’s pin knotted the score at 28-28 and set the stage for two of the River Hawks’ best wrestlers to win the match for the home squad.
Armstrong’s Logan Harmon notched a pin in under a minute when he dropped Pine-Richland’s John Hoffman in the 182-pound match.
Harmon, a sophomore from Apollo-Ridge who wrestles for Armstrong as part of a co-op between the two schools, showed power, patience and poise and has gained the attention of his head coach and his teammates with his work ethic.
“Hard worker, super-athletic, you know he’s doing the right things right now,” Newill said of Harmon. “He’s doing all the right things in the room. He’s learning and growing and he’s headed for good things.”
At 195 pounds, Pine-Richland’s Zachary Shaver was able to pin Armstrong’s Garrett Kelley at 3:13 in the second period to tie the team total once again, this time at 34-34.
However, Pine-Richland would not score another point in the match as Newill’s decision to send Michael Bushaw out at 220 pounds to collect a forfeit and allow senior Oggie Atwood to wrestle at heavyweight against the Rams’ Miguel Jackson played out to perfection and resulted in a victory on Senior Night for the River Hawks.
Atwood made quick work of Jackson, and the No. 3-ranked wrestler at 220 pounds collected a match-sealing pin at 3:50 of the second period.
“I knew they were trying to get around me (with a forfeit), which is kind of nice because people have been doing that this year and it lets me know that I’m doing the right things and other kids don’t want to face me,” Atwood said. “So when I got to my match tonight, I went straight at him.”
The River Hawks will travel to Knoch next Wednesday, January 16 for their next match.
Download Premium WordPress Themes Free
Free Download WordPress Themes
Download WordPress Themes Free
Download Premium WordPress Themes Free
free download udemy course
download mobile firmware
Download WordPress Themes
free download udemy course