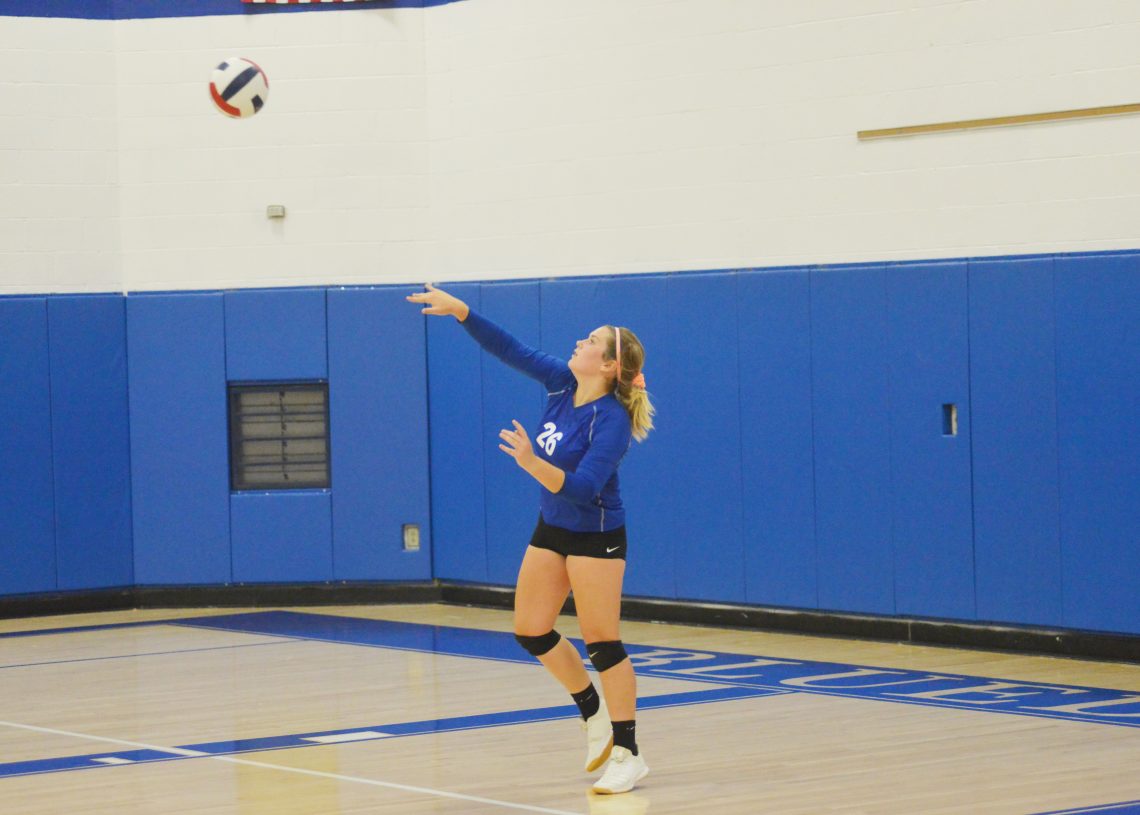 A tight second set wound up being the deciding factor in the Blue Devils (4-1 overall) 3-0  win over the Riverview Raiders (2-3). After fighting back from down 15-7, Leechburg rallied back to win the middle set, 26-24, before taking the third set and the victory.

Handling the pressure of being down is something that Leechburg head coach Eve Hebrank expects of her team on a nightly basis, and last night was no different.

“I always expect them to play really well under pressure. In that moment, we were so far behind, so I told them we just have to take it one point at a time. We’ve been really focused in calming the game down and keeping it in our control. As long as we continue to do that, moments like that will happen,” Hebrank said.

The second set was capped off by some great serving from McKenna Pierce.

Pierce was able to bring the Blue Devils back from 24-19, eventually forcing a Riverview timeout when the game was knotted at 24-all.

After the game, Hebrank complimented Pierce’s servicing in the Blue Devils comeback effort.

“I’m really proud of McKenna, she had a great run there on the serves to get us back into the game,” Hebrank said.

After settling in during the fist set, the Blue Devils were able to open the match with a 25-18 victory.

“We had some great serves in that first match, we were swinging well. We had a little bit of a slow start, but once we got the momentum rolling, it was ours,” Hebrank said.

The final set started off a lot like the prior two, with both teams trading leads up until the score was tied at 9-9, after that the Blue Devils were able to assert their dominance, walking away with a 25-17 victory to seal the match.

Both Brenna Callahan and Maddie Ancosky led Leechburg with eight kills, while Ava Powell was right behind finishing with seven.

Ashley Grine provided a key net-front presence, recording seven blocks to go along with her four aces and three kills.

Defensively, Callahan lead the way for Leechburg with a team-high six digs.

Next up for Leechburg is the Greensburg Central Catholic Centurions, a frontrunner in the section and the fifth ranked team in the coaches rankings for WPIAL Class A.

“(GCC) is a powerhouse, we’re going to come in here focused during practice, work on a couple different things to take them down and hopefully we can get a win off of that,” Hebrank said.

Leechburg will be heading to the home of the Centurions tomorrow, with the start time set for 7:15 p.m.