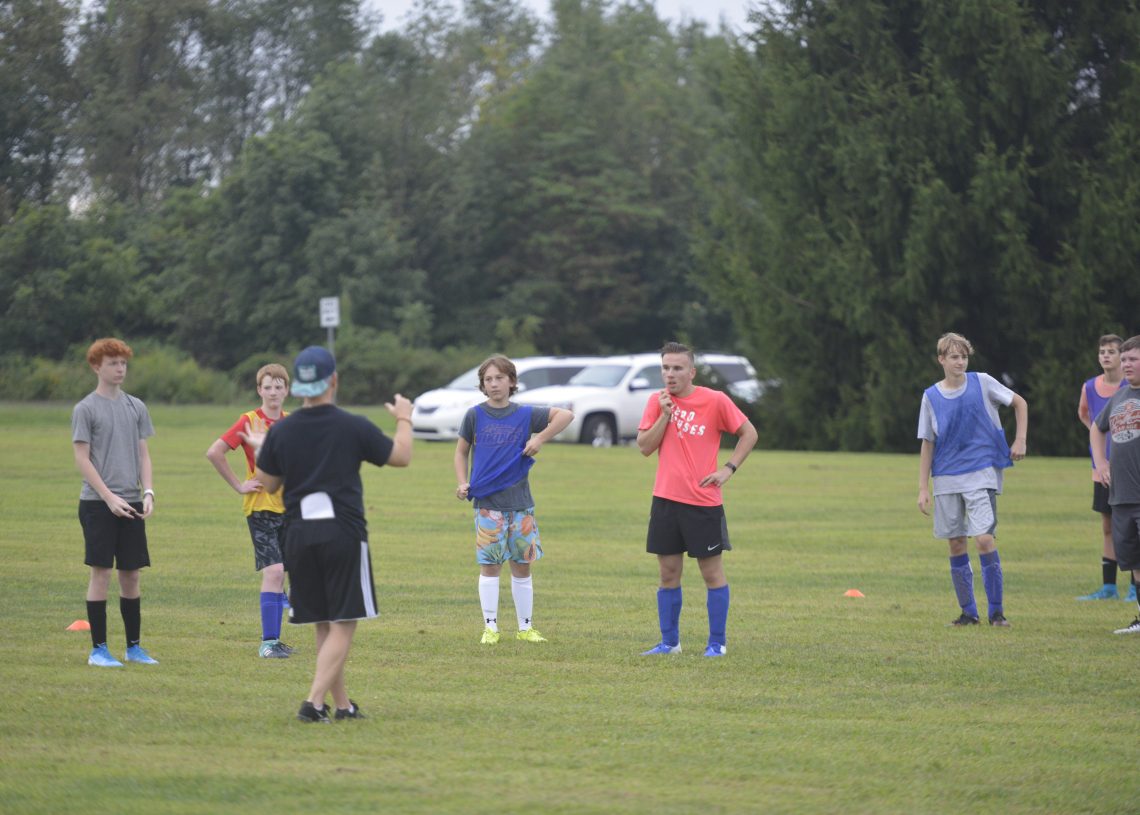 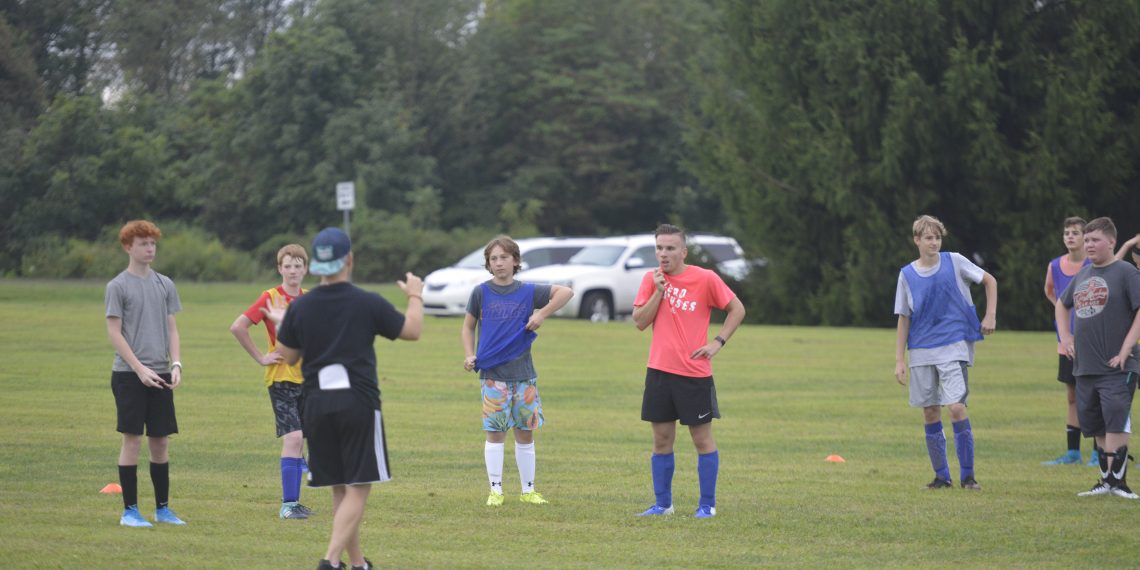 Head coach Brad Walker (above) stops practice for a moment to coach up his Blue Devils on Tuesday. Leechburg opens its first season in program history on Saturday as they travel to Elwood City. Jake DeLuca | Leader Times

This time last year, a varsity soccer team was nonexistent at either Leechburgh or Apollo Ridge. Now they join forces in a cooperative effort under Leechburg Blue Devils name.

The success of the girls coop between the two schools under the Apollo-Ridge name proved that the merger was a positive for the respective districts, setting in motion the boys’ program .

Taking over the program is head coach Brad Walker.

Walker graduated from Kiski Area before playing collegiately at Pitt Johnstown. Walker began his coaching career at his alma mater as an assistant for three seasons.

After his time with the Cavaliers, Walker played an intricate role in the build up of the Highlands soccer program over the last four years.

Though some may look at starting up a new team as a daunting task, Walker has embraced the challenge.

“It was exciting — I think the realization of the girls team really helped this team blossom. A lot of the interest has been from families with kids playing who want their sons and friends to play. It’s been a great community effort to get this program started,” Walker said.

Now that the Leechburg program is a reality and initial excitement dissipates, Walker is looking forward to the experience of coaching a new team and starting traditions, rivalries, and creating an identity.

“We could still grow, but it was really exciting through the winter and spring months that we’re going to have a soccer team. The whole process of starting something new from game balls to uniforms, it’s been great,” Walker said.

While some teams have a waiting period in their first year before they can officially join the WPIAL, Leechburg will be starting section play right away.

The Blue Devils will be in the WPIAL’s Class 2A – Section 2, made up of three preseason WPIAL top -ten teams in Deer Lakes, Shady Side Academy, and Mount Pleasant.

Leechburg will be thrown right into the fire to start the season. The Blue Devils take on Mount Pleasant and Shady Side to open their section schedule.

While some may be intimidated by playing a pair of the top dogs right off the bat, Walker is looking forward to the experience.

When it comes to a coaching philosophy, working with a younger team with limited experience has made Walker take wait-and-see approach, with an attention to detail when it comes to fundamentals.

“I think the hard thing is going to be slowing my mind down. We just have to learn one thing at a time, perfect that and move forward.”

When examining the players on the Blue Devils’ roster, twelve of the team’s 15 players are either freshmen or sophomores, with two seniors and one junior rounding out the squad.

“I’ve always been a main player at forward forever, because of my speed. It really helps, because if (my teammates) get into trouble they can just send me. Since I’ve been playing since I was little, so I think that gives me an advantage,” Mull said.

With a new program, there tends to be players who haven’t played the sport in recent seasons or haven’t since they were competing on the youth level.

Dane Davies, a defensive wing for the expansion team of sorts, is one of the aforementioned players who haven’t had the opportunity to play. Now he’s enjoying the new opportunity and making the most of a unique opportunity.

“I played a little bit when I was younger, but we didn’t have anything in high school. It’s a chance to play more sports that I enjoy and have a nice soccer career,” Davies said.

Leechburg will open its season on Saturday with a trip to challenge Ellwood City at noon. The Blue Devils’ first home game will be against section opponent Valley at 4 p.m.