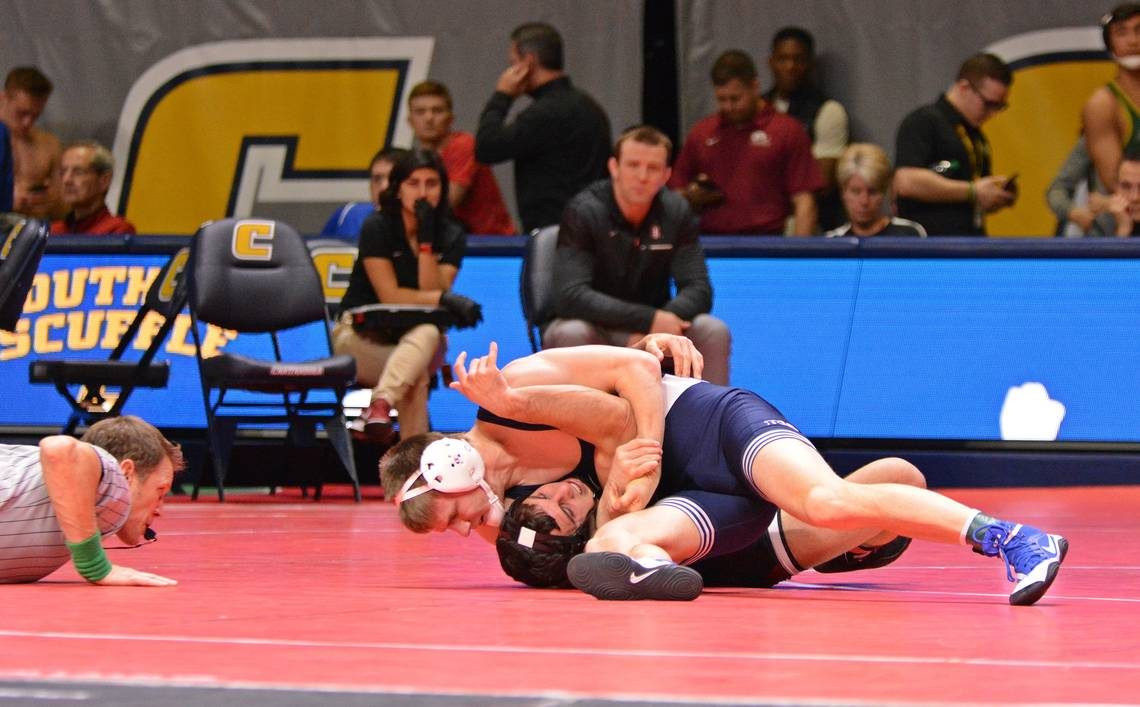 Jeff Curry - USA Today Penn State’s Jason Nolf looks for the pin of Stanford’s Jared Hill in their 157-pound second round match of the Southern Scuffle on Tuesday in Chattanooga, Tenn. Nolf did pin Hill in 1:21 and later tied the all-time pin mark with his 53rd pin in the third round.

Yet another benchmark in Jason Nolf’s illustrious wrestling career took place on Tuesday as the Penn State senior tied the Penn State program’s record for falls in his second round victory at the Southern Scuffle tournament in Chattanooga, TN. Nolf collected pin number 53 as a member of the Nittany Lions in his win over Appalachian State’s Will Formato, tying the mark held by three our past Nittany Lions. The Yatesboro native defeated Stanford’s Dominick Mandarino, his semifinal opponent on Wednesday, in 5:22 to give him his ninth fall of the year and now program-best 54th pin all-time.

Nolf’s performance was just one of the significant happenings for Penn State during a meet that saw Bo Nickal collect his 100th career win. Nickal’s third pin on Tuesday over Navy’s Josh Roetman came in 1:47. It was Nickal’s 100th career win to just three losses. Nickal won the title in the 197-pound division in what was his 50th career pin and third championship at the event.

The Southern Scuffle featured Oklahoma State and Iowa State, just a few of the powerhouse-programs vying to knock the Nittany Lions off as defending tournament champion. This didn’t prevent the Nittany Lions from sending 11 wrestlers into the semifinals and carrying 10-point lead over Oklahoma State in the team race heading into the semis, with nine of those wrestlers moving on to the finals.

Two finals matches, including the 157 and 285-pound matches pinned two Penn Staters against one another.

One of those bouts included Nolf, who faced sophomore Bo Pipher.

Nolf’s tournament wouldn’t include an additional pin against his teammate, but did include a tournament win, defeating Pipher by technical fall, 16-1.

Penn State won the team title with a score of 216.5, a new record for the event. Oklahoma State finished second behind the Nittany Lions with a score of 188.5, followed by Iowa State who posted a 104.0.

The title is Nolf’s third at the Southern Scuffle in his final stop at the event, and the Nittany Lions’ eighth in a row.

Wolves' head coach Judd McCullough on the win over Leechburg