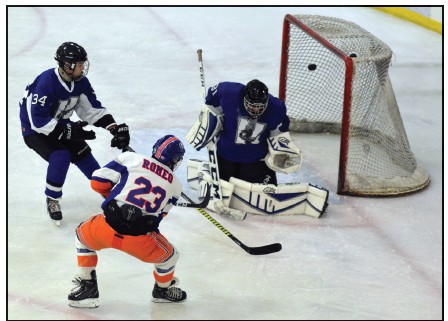 Whatever could go wrong did go wrong for the Armstrong River Hawks on Thursday night against Hempfield.

The Spartans poured on the scoring early and often against head coach Lee Grafton’s team as Hempfield outshot Armstrong, 40-23, in what turned out to be a lopsided, 12-goal win.

Armstrong appeared flat in their first game action in two weeks and just 4:18 into the contest, the River Hawks trailed, 3-0, and Grafton was forced to use his timeout in order to attempt to settle his team.

The stoppage did little to stem the relentless Hempfield attack and by the time the first period came to an end, the Spartans held a 5-0 lead.

Not only held a distinct advantage in shots on goal in the period (20-7), but the Spartans continually carried the play to the River Hawks and drove the puck deep into the Armstrong end.

Hempfield scored four more goals before Ethan Prugh finally got Armstrong on the board late in the second.

Prugh’s goal was a spectacular individual effort as he split the Hempfield defense and essentially carried a Spartans defender on his back before beating goaltender Sean Lanager.

Prugh’s highlight-reel marker would be the only River Hawks goal of the evening.

The Spartans’ relentless attack chased Armstrong goalie RT Bowser from the crease after the second period.

Bowser was victimized in front by a Hempfield squad that fired crisp passes through the crease which created wide-open shooting lanes.

The River Hawks also gave up a couple of early odd-man rushes that left Bowser facing breakaways or 2-on-1s and the Spartans were efficient in making Armstrong pay as they scored 13 goals on their 40 shots, a shooting percentage of 32.5, an astronomical number in that department.

The River Hawks return to action on December 6 with a home game at the Belmont Complex against Latrobe.