Gremlins run away from Bulldogs, 83-59 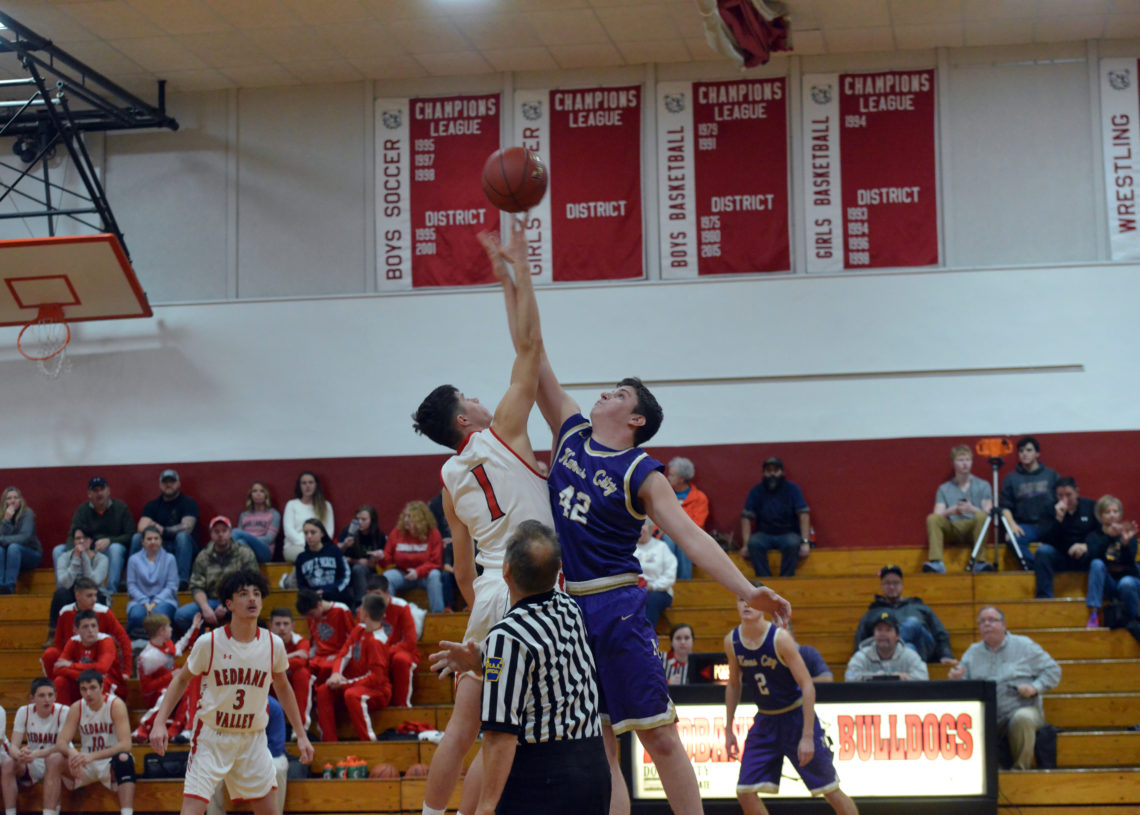 Redbank Valley guard Keaton Kahle (1) and Karns City forward Nathan Waltman (42) contest the opening tip in the teams' KSAC South Division opener on Wednesday night at Redbank Valley Junior-Senior High School in New Bethlehem. Kahle scored 25 points for the Bulldogs, but Waltman and the Gremlins walked away with an 83-59 victory.

The Gremlins used a big second quarter during which they outscored the Bulldogs, 19-7 to open up a 14-point halftime lead that was never threatened in the second half.
“Everything kind of comes from our defense,” Karns City head coach Chris Bellis said after his team’s strong showing. “I thought we defended well, our offense worked well. They pressured us the whole game so our guards ended up with the ball in their hands quite a bit. (Austin) Fahlor and Chase (Beighley) had 29 and 21 tonight and I’ll bet they led us in assists. They played very unselfishly tonight.”
Redbank Valley senior guard Keaton Kahle opened the game’s scoring with a nice putback after he corralled an offensive rebound. Fahlor answered on the Gremlins’ next possession with a long three that put the Gremlins up, 3-2 and begin the theme of the period as each team traded baskets for the majority of the first eight minutes of play. Redbank Valley regained the lead at 12-10 when Kahle knocked down a contested jumper, but Fahlor took advantage of a Bulldogs turnover and scored on a nice drive at the other end to knot the score once again. Kahle and Fahlor traded baskets again, but it was another three by Fahlor which put the Gremlins up, 20-18 with 30.3 seconds left in the quarter, a lead they would carry into the second quarter.
The Bulldogs would not lead again.
The Gremlins came out on fire in the second quarter and used an 14-4 run to open up a 34-22 lead before Redbank Valley head coach Emmanuel Marshall called a timeout in an attempt to slow down a hard-charging Karns City team. Following the stoppage, Kahle — easily the Bulldogs’ best player all night at both ends of the court — hit a three to pull the Bulldogs back within nine points, 34-25.
Bellis then called a timeout with 1:35 remaining in the quarter and his team came out of the huddle with yet another answer for the Bulldogs as the Gremlins drained a three which was immediately followed by a steal and a layup at the other end by Fahlor.
The sequence put Karns City up by 14 as the teams headed for the locker rooms at halftime, 39-25, and according to Marshall, the Gremlins’ hot shooting in the second quarter was the biggest factor in his team’s second loss of the young season.
“They shoot the ball well and we did not do a good job of defending the three in the second quarter,” Marshall said. “That’s a game-changer. They hit a couple of threes and we weren’t able to rotate fast enough so they were finding the open man and they were hitting some shots. We just didn’t play good defense.”
Redbank Valley played inspired basketball in the third quarter and Karns City held a slight advantage in scoring during the period, 22-20. Kahle had a big quarter as he scored nine of his team-high 25 points in the frame, but each time the Bulldogs looked as if they were about to start a scoring run, the Gremlins answered with big shots by a multitude of different players and led by 16 points at the end of three quarters of play, 61-45.
In the fourth quarter, Karns City held the Bulldogs at bay and Fahlor, Beighly and the rest of the Gremlins continued to score seemingly at will and put up a season-best 83 points for the game. The Gremlins had not topped 62 points in their first two games which included a 70-62 loss to North East and a 56-31 victory over Portersville Christian in the AC Valley Hoops for Heroes Crossover this past weekend.
“We’re confident, but we’re cautiously confident because we know that every night is a battle in the KSAC South,” Bellis said. “We know that there is no team we can take lightly. We know that there is very little margin for error in this division. Right now, we’ll enjoy the win, but we’ll hit the reset button tomorrow and then be ready for Keystone on Friday night.”
As for the young Bulldogs, who lost starting freshman guard Bryson Bain on the final play of the first half, Marshall echoed Bellis’s sentiment about mentally wiping the slate clean before their next contest this Friday against Union.
“Tomorrow we’re just going to watch some film, look at what we could have done better and just prepare for the game on Friday,” Marshall said. “We’ll be ready for Union.”
Download Best WordPress Themes Free Download
Free Download WordPress Themes
Download Nulled WordPress Themes
Premium WordPress Themes Download
lynda course free download
download samsung firmware
Free Download WordPress Themes
udemy free download