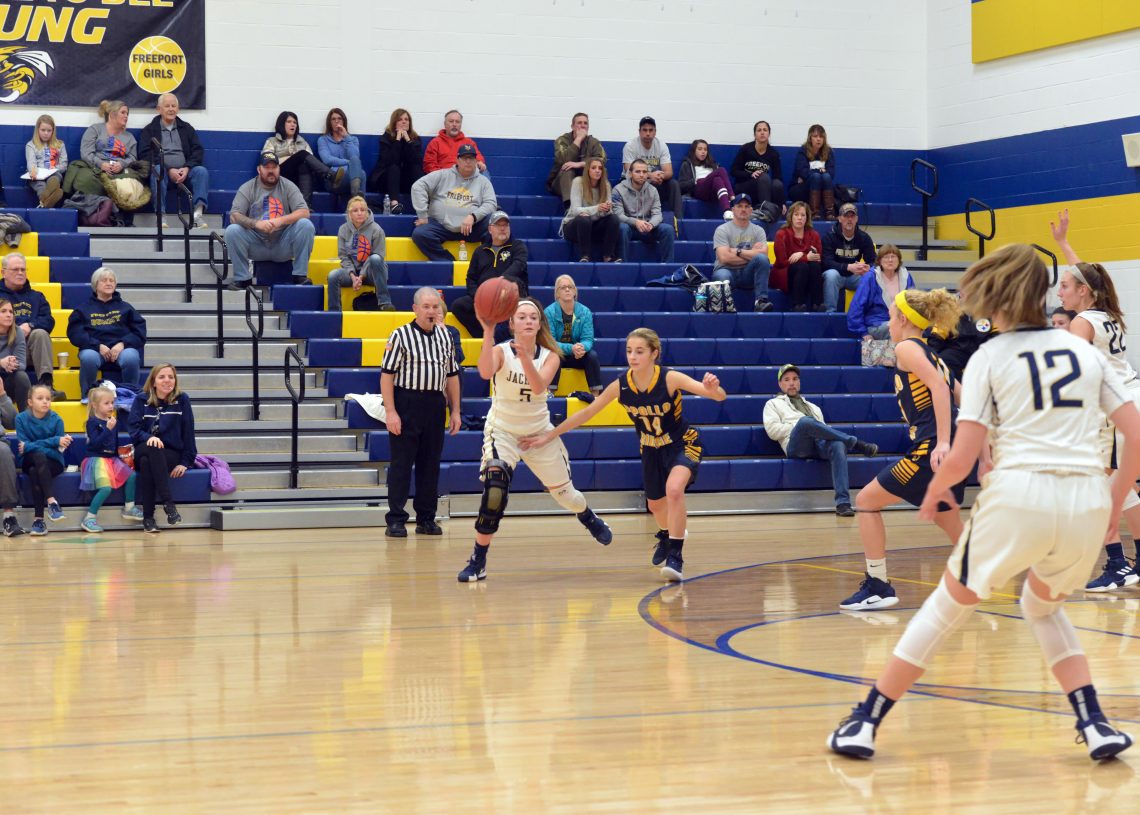 Apollo-Ridge girls’ varsity basketball head coach Jim Callipare came into Monday night’s WPIAL 4A-Section 1 clash against Freeport with a plan and for three quarters, the Vikings executed it to perfection.

Apollo-Ridge was able to slow down the fast-charging Yellowjackets to a near crawl over the course of the first 24 minutes, but Freeport was able to double their point total in the fourth quarter to pull away from the Vikings, 34-28.
The home win gave Freeport sole possession of second place in a hotly-contested section and head coach Fred Soilis noted that as long as his team was able to keep grinding out wins in the section, the Yellowjackets would be able to carve their own path to the postseason.
“The important thing is that we keep winning so that we can control our own destiny and control where we’re headed both in the section and going toward the playoffs,” Soilis said. “We’re ranked fourth now and if we can put together a game where we beat North Catholic, we could play for a share of the section, but we’re not done with the first cycle. If we can beat North Catholic, we’ll have a tie. If not, our goal is to get a first round bye.”
The Vikings actually led by three at two different points in a low-scoring first half and Apollo-Ridge used a slow-it-down pace to frustrate a Freeport team that came into the contest averaging 66.9 points per game.
At the end of the first quarter, the Vikings led 7-6 and held a 12-9 lead at one point late in the second half, but Freeport was able to tie the game 12-12 as the team’s headed to the locker room following the second quarter.
“That was the game plan coming in because we’re not a team that’s going to score 70 points on an average night,” Callipare said. “I would say about 98 percent of the game we did what we wanted to do offensively, but we had that one little lapse in the second half and it was the difference in the game. (Freeport) is a very good team, they’re very balanced, but I’m proud of the way our kids played tonight. They dug in and played good defense. We did what we wanted to do for almost four full quarters.”
The Vikings continued to give the Yellowjackets trouble defensively, though Freeport was able to get good looks at the hoop throughout the third and fourth quarters. Apollo-Ridge was able to keep the game close and at the end of three quarters of play, Freeport held the slimmest of leads, just one point, 17-16.
Both teams exploded in the fourth quarter and Freeport matched its offensive output through the first three periods with 17 points in the final frame.
Freeport juniors Harley Holloway and Samantha Clark hit back-to-back threes with just under 3:35 remaining in the game to open up a six-point lead, 26-20. Clark led all scorers with 14 points and also pulled down nine rebounds. Holloway was second on the team in scoring with 12 points and she also grabbed four rebounds and added three assists.
For Apollo-Ridge, senior forward Maddy Moore played a tremendous all-around game and tallied eight points, five rebounds, five assists and six blocks. Sophomore guard Morgan Gamble led the Vikings with nine points in the losing effort.
The win raised Freeport’s record to 8-2 on the season and 4-1 inside section play. Apollo-Ridge dropped to 7-3 on the season and 2-3 in the WPIAL 4A-Section 1 standings.
Freeport will travel to Knoch and continue section play against the Knights on Thursday evening at 7:30 p.m. Apollo-Ridge will also play their next game on the road, a non-conference contest against Winchester-Thurston on Wednesday night at 7:30 p.m.
A complete video rebroadcast of Monday night’s Freeport/Apollo-Ridge girls’ varsity basketball game as well as a post-game video interview with Apollo-Ridge head coach Jim Callipare can be found at www.samplesports.com.
Premium WordPress Themes Download
Premium WordPress Themes Download
Premium WordPress Themes Download
Download Nulled WordPress Themes
udemy paid course free download
download lenevo firmware
Download Best WordPress Themes Free Download
lynda course free download