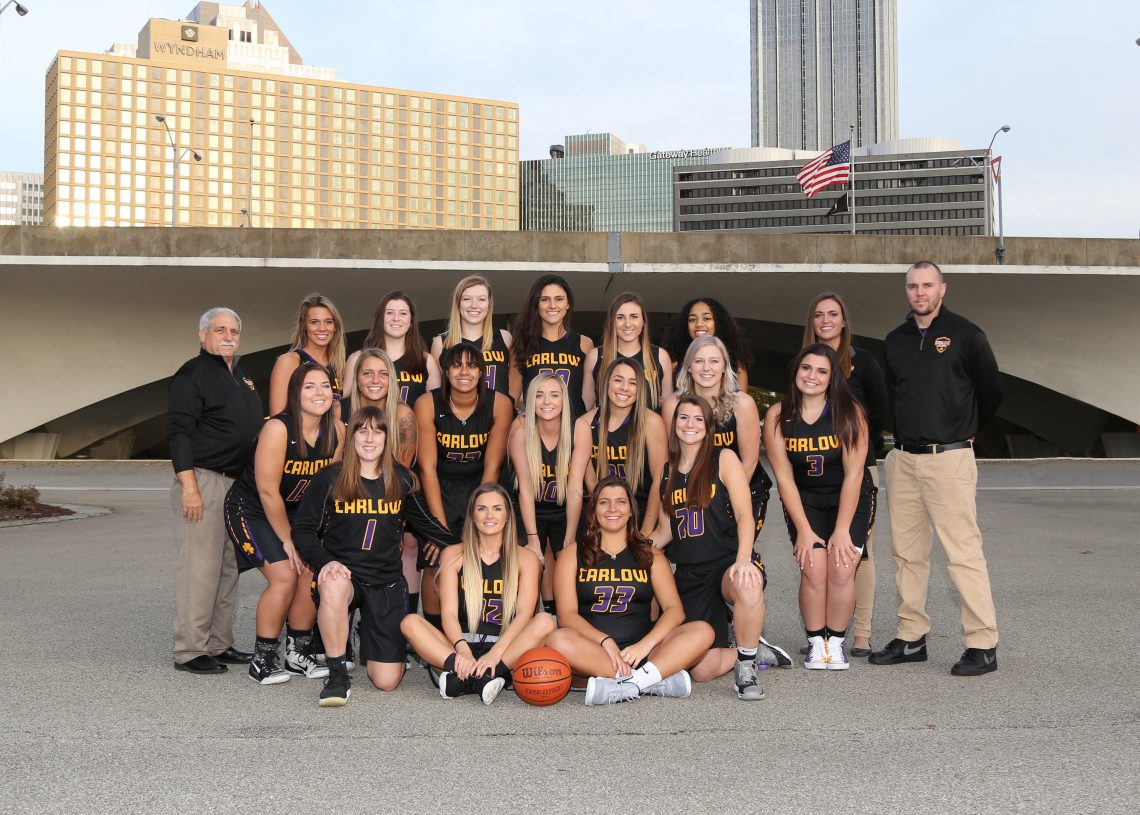 By JOE RHOADES
Sometimes the jump from high school to collegiate sports can be a daunting task for the average 18 year-old. Whether it be the curriculum, a new environment, or the jump in competition, some athletes find the change to be an overwhelming transition.
For Megan Ost, Gabby Olinger, and Maddie Valyo, the move from their respective Armstrong County high schools to Carlow University was made easier by a little recognition of those around them.
The trio of basketball players just completed their freshman season at Carlow University, helping the women’s basketball program advance to the USCAA Division I playoffs. Olinger, Ost and Valyo were three of 11 freshman on the Carlow roster in 2018-19, something Celtics’ head coach Tim Moore knew was coming going into his second season with the university. Moore’s efforts to bulk up his roster with a bounty of first-year players made it possible for the local trio to make an instant impact for their new college team.
“Megan [Ost] had a fantastic season. She ended up being a starter once one of our seniors graduated after first semester. She took the opportunity and ran with it. The one thing we really emphasized to her during our exit interviews was to continue to embrace her role. We had our All-American go down and Megan’s emergence kind of became a blessing in disguise. I think she had four, maybe five double-doubles once she got in,” Carlow head women’s basketball coach Tim Moore said of Ost. “She finished the season really strong, her confidence was really up by season’s end and we expect for of that from her. We have big plans for her next year based of what she did this season, and that was really exciting to see.”
“Gabby [Olinger] did really well considering she didn’t get too many minutes early on. I think the college experience really hit her hard and learning the offense, but coming back to the second semester, she made great strides. We put her in the one game and she ran with the opportunity, like we want to see from young players when it comes,” Moore said of Olinger. “Her first game in against Ohio Christian, she kind of helped win us the game. She was all over the place, diving on the floor for loose balls, getting rebounds and she just brought us a certain kind of energy that every team needs.”
“Maddie [Valyo] is going to be someone we will count on next year. She had a tough season getting on the floor, but she knows what she needs to work on to see those minutes that weren’t there during her [freshman] season. She has a positive attitude and you never have to worry about effort with her,” Moore said of Valyo. “I think she’s going to embrace the process of getting better and making that jump to the college game in year two. She’ll be a significant role player for us for sure.”
Coming from the Apollo-Ridge and West Shamokin programs, all three players knew of each other due to proximity. Before West Shamokin made the move to District VI and the Heritage Conference, the Wolves and Vikings often saw each other in WPIAL section contests, pinning Olinger against Ost as freshmen and sophomores. Later the two, along with Valyo, gained reverence when they faced off during AAU contests.
The dynamic between the group wasn’t always friendly as currently constructed. The atmosphere when arriving at Carlow was one resembling rivals, but with eight other freshmen and a change of scenery, the mood became more close-knit based off of their past knowledge. 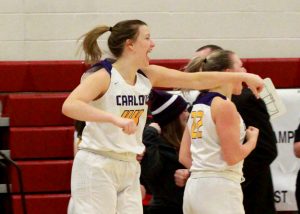 Photos courtesy of Robert Cifone
“I played with Maddie on the Wildcats AAU team, then my junior year I went to the Bruins and that’s when Gabby joined the Wildcats, so we just missed all playing together,” Ost said. “Actually, we all pretty much grew up as rivals and we all knew how the other team was doing. We more or less got to know of each other through AAU [basketball].”
Once the season started and a mixture of injuries and graduation shuffled Moore’s depth chart, each player saw their role playing time increase.
Ost, who received first team honors on the All-Leader Times team during her junior and senior seasons, was first to find the court. Just as the case was during her time with the Vikings, she became a double-double machine once her playing time was on the uptick. Olinger wasn’t far behind, seeing starting minutes alongside Ost later in the season, giving the Celtics an all-Armstrong County front court.
Olinger displayed the kind of experience you would expect from a player who saw valuable minutes during West Shamokin’s PIAA playoff run during her junior year of high school. Valyo came on strong towards the end of that campaign, displaying the post presence that made her a threat at all times with the Wolves during her senior season under coach Frank Nagy and staff. 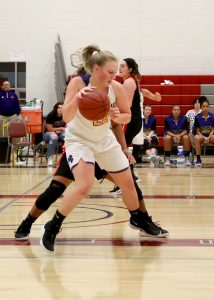 The progression of each player made it possible for the Celtics to have five freshman on the court at any given time, something that will benefit the program moving forward.
“The ball is still round, it’s the same game I was playing during high school, but I struggled at the fact that I didn’t want to mess up and building confidence early on. I passed the ball a lot and passed up opportunities to impact the game,” Ost said. “As the season went on and I gained that confidence, I started letting the game come to me like I did in high school and really started to enjoy playing like I know I can.”
“Ever since high school, Gabby has always been there to push me and once we started getting down players [due to injury] she really pushed me to work harder and do the best I can,” Valyo said of her teammate. “ She told me how she wanted to be out on the floor together again and that’s what really got me going and play harder.”
The Celtics’ playoff run ended quickly, thanks to an athletic Paul Quinn College team the Celtics faced in the USCAA Division I quarterfinals. The experience on the playoff stage, losing to the Lady Tigers by 21, provided another lesson on what has been a short journey for the young Carlow squad.
What’s still ahead for Olinger, Ost, and Valyo is an opportunity to contribute for the next three seasons and continue to trend upward. Each player has a different tool in their arsenal they would like to perfect, but the common theme is the acknowledgment of how much they’ve grown in a short span of time, along with what improvements still lay ahead. One thing that is for certain is the fact that upcoming sophomore class, along with its familiar faces, will continue to lean on each other as the case was in 2018.
“Being here and playing with such a tight group of freshmen makes the experience all the better. At the start of the season, most of the freshmen were sitting the bench while the upperclassman played. That made us all work harder together and made us all have to fight it out for whoever got to play,” Olinger said. “By the end of the season, there were five freshman playing together at one time and I think it showed how much we pushed each other. We all want to get better and it showed, now we want to still keep pushing each other and see how good we can really get.”
Premium WordPress Themes Download
Download WordPress Themes
Free Download WordPress Themes
Free Download WordPress Themes
udemy course download free
download coolpad firmware
Premium WordPress Themes Download
online free course