Armstrong wrestlers Atwood, Harmon on fast track to Hershey after hot starts in 2018-19 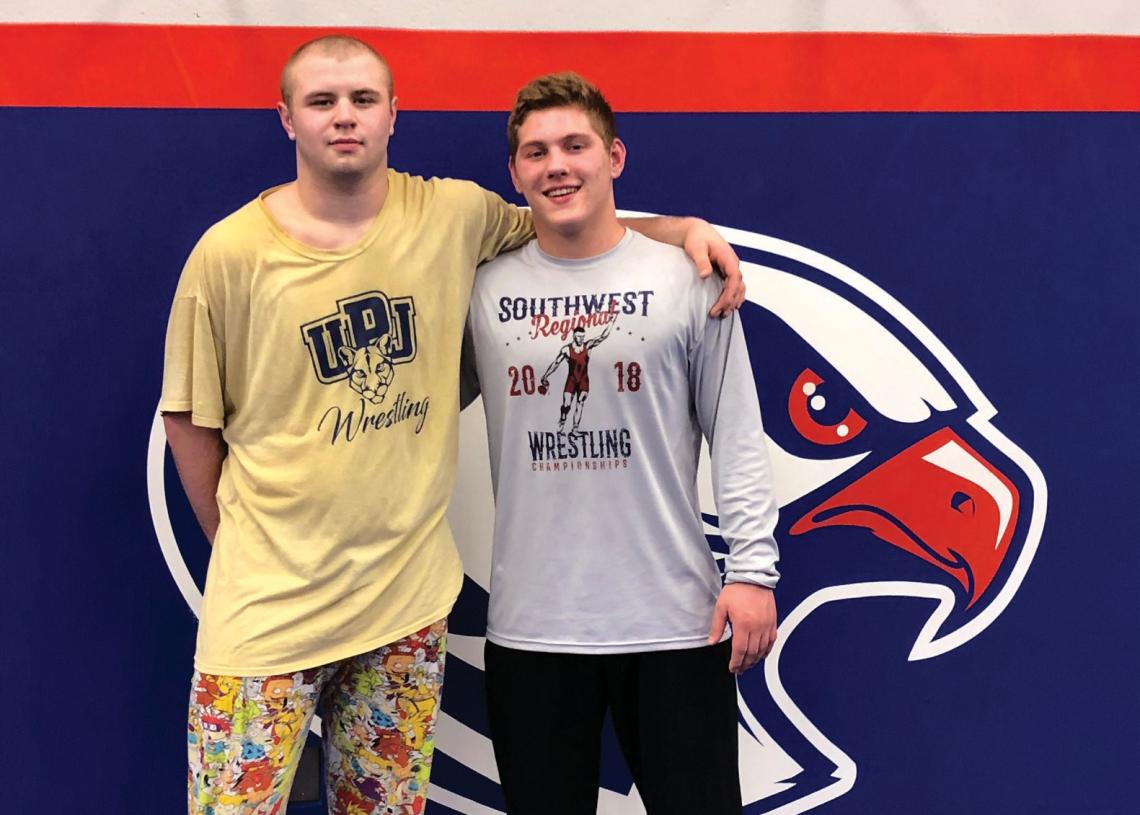 Armstrong wrestlers Oggie Atwood (11-0, senior, 220 pounds) and Logan Harmon (11- 1, sophomore, 182 pounds) will look to translate their practice partnership into a joint trip to Hershey this season for the PIAA championships.

Armstrong senior 220-pounder Ogden “Oggie” Atwood is confident at the moment and rightfully so.

Atwood overcame cancer as a junior and still managed to qualify for the PIAA championships in Hershey despite the overwhelming odds he faced.

While his showing in last year’s tournament was below the line in his eyes, Atwood chose to look at his performance as a learning experience as well as motivation to come back hungrier than ever in 2018-19.

So far, all Atwood has done is make people not want to wrestle him while climbing to a No. 1 ranking in his weight class in the WPIAL. Atwood is also ranked third in the state at 22o pounds. In 2018-19, Atwood is 11-0 and has won six matches by fall and two more by forfeit.

“It helps because I know what I’ve been doing has been right,” Atwood said of the growing number of forfeits by his opponents. “Rankings don’t mean anything to me. If other kids are scared to wrestle me, that means I’m doing what I should be.”

At his most recent match, a 46-34 team victory over Pine-Richland on Senior Night, Armstrong head coach Brandon Newill played his cards correctly and avoided another forfeit at 220 pounds by sending out Michael Bushaw in Atwood’s place.

That allowed Atwood to wrestle the Rams’ Miguel Jackson at 285 since both wrestlers weighed in at 220 prior to the match.

The River Hawks’ unquestioned team leader made quick work of Jackson by recording a pin at 3:50 of the second period.

Atwood’s sixth pin of what has so far been a stellar senior campaign came just two matches after Apollo-Ridge sophomore Logan Harmon pinned his opponent in under a minute at 182 pounds.

Harmon, a standout for the Vikings on the gridiron, wrestles for the River Hawks as part of a co-op between the two schools.

It has been a match made in wrestling heaven as Harmon has powered through the start of his sophomore campaign, racking up an 11-1 overall record with seven pins and two more victories by major decision.

‘’Last year was kind of upsetting because I didn’t have a place to wrestle,” Harmon said. “This year, I got to come to Armstrong and it’s amazing here. I love the people, the coaches, the staff. Everything is good here.”

Harmon’s emergence this season has raised a the now-likely possibility that he may also qualify for a trip to Hershey. At similar weights, it was only natural that Harmon and Atwood would work together as practice partners.

The two have helped each other immensely in the training room and have realized that they share similarly intense work ethics. That similarity has led the two River Hawks to push each other in practice to replicate the emotions and conditions faced during an actual match.

“I’m happy I have a kid like (Harmon) in the room with me every day, he pushes me maybe harder than I want to be pushed some days,” Atwood said. “We’ve really been pushing each other. It’s a lot more than I’ve ever done in the past so I know it’s going to help me this year, and in college.”

For Harmon, the chance to work every day in practice with a state qualifier and one of the top 220-pounders in Western Pennsylvania has certainly paid dividends and the 182-pounder from Apollo Ridge is certainly aware of that fact.

“It’s definitely nice to practice with Oggie, he’s definitely helped me a lot this season,” Harmon said. “I’m glad that I get to be Oggie’s partner throughout the season.”

Though the River Hawks’ next match is Wednesday, January 16 at Knoch, each individual match the rest of the way for Atwood and Harmon will carry an added significance as both grapplers keep an eye toward Hershey.

Atwood, who watched Jacob Robb win a PIAA title at 220 pounds in 2016, has a game plan right now and it is one in which he, his head coach and his practice partner are confident.

“I was lucky enough my freshman year to be around Jacob Robb, I picked up so many things from him,” Atwood said. “I’m fully prepared. I’ve been working for it.”