The Vikings knew that they needed to take care of business against the Lions and thanks to a huge second quarter, head coach Greg Fox’s team did just that in a dominant, 73-38 home victory.
“We talked about pressing them and creating turnovers and creating offense off of that,” Fox said. “We certainly did that tonight. We haven’t had that all season. It was a much-needed win, a section win. In the second quarter, the kids did a great job of pressing and creating turnovers and we capitalized off of those turnovers and we were able to create that lead.”
The student section asked the home crowd before the game to engage in a “silent night” which meant that there would be no cheering until the Vikings scored their tenth point.
Senior forward Bobby Mangan broke the silence in dramatic fashion as he converted a layup underneath and drew a foul which sent the previously hushed student section into a frenzy. Mangan made the ensuing free throw to put Apollo-Ridge up, 11-4.
The Vikings controlled the pace from the opening tip and led by eight at the end of one quarter, 20-12.
In the second period, sophomore guard/forward Klay Fitzroy took over the game both offensively and defensively. Fitzroy did it all for the Vikings in the second period as he dropped in ten points and added four rebounds and three assists. Fitzroy’s play, along with the hot shooting of sophomore guard Keighton Reese, helped the Vikings to a huge halftime advantage, 42-21.
“As a team, we wanted to come out and jump on them and put them away early,” Fitzroy said.
Though Reese started out 0-for-4 from beyond the arc, Fox implored his shooting guard to keep firing from distance and that confidence paid off for both Reese and the Vikings.
Reese hit just one three-pointer in the first quarter, but he heated up in the second period and dropped in nine points in the period, all from long distance.
After the game, Fox said that he explained to Reese that he needed to keep shooting, not only for his own confidence, but for the way it opened up shots for his teammates.
“It’s always ‘keep shooting’ with him,” Fox said of Reese. “We’ve seen it too many times where he can fun off five, six, seven in a row. We tell him if he’s open to shoot the ball. Our kids recognize that when the first one goes in, they try to feed him the ball. They also know that in return, if (Reese) makes shots, it’s going to open up shots for them as well.”
With a comfortable lead heading into the second half, the Vikings still kept the pedal to the floor and continued to press until the game was in hand. Both Fitzroy and Reese continued to fill up the stat sheet in the period. At the end of 24 minutes of play, Apollo-Ridge led comfortably, 61-31.
Fox pulled his starters early in the fourth quarter and though Fitzroy was extremely close to the elusive, high school triple double, Fox noted that he would not leave a starter in the game during a blowout, no matter how close that player was to a significant milestone. 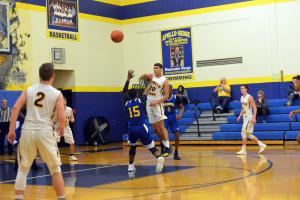 Fitzroy sat out the final four minutes and change and his stat line on the night was something to behold. The sophomore scored 19 points and added eight rebounds, nine assists, six steals and two blocks. More impressive, Fitzroy only had one turnover on the night, remarkable because of the amount of times he handled the ball as well as being able to consistently produce in the face of consistent double-teams by Propel Braddock Hills.
“He had a huge game and he’s capable of doing that more often,” Fox said of Fitzroy’s outstanding effort against the Lions. “He does everything for us, he rebounds well, he scores, he plays point (guard) sometimes. I know he wanted to be in there more in the fourth quarter, but it wasn’t going to be tonight.”
The win raised the Vikings’ overall record to 7-8 with a 3-4 mark inside section play. Apollo-Ridge will travel to first place Sto-Rox for an important section showdown on Friday evening at 7:30 p.m.
A complete video rebroadcast of the Apollo-Ridge-Propel Braddock Hills boys’ varsity basketball game can be found at www.samplesports.com.
Download Best WordPress Themes Free Download
Download WordPress Themes
Premium WordPress Themes Download
Download WordPress Themes Free
udemy paid course free download
download lava firmware
Download Best WordPress Themes Free Download
udemy free download